Coming into this race I felt like most triathletes do the week before an Ironman event, I felt rotten.  My body was recovering from the work I did in the previous weeks..and months.  My runs felt nasty and running at an endurance pace was a struggle.  Not a struggle I lost, but still it was harder than you would expect when you are regularly running at a much faster pace.  When I rode my bike on Tuesday my legs felt like boat anchors.  I guess you could say that I was right where I should be.  As the week went on things got better in the pool and on the bike, however when I ran on Friday morning (the last run before the race) it still didn’t feel “right”, but it was getting their…but in reality that’s what you want.  It’s all about peaking at the right time.  That’s why certain sports teams win the super bowl, or an unknown college basketball team from the middle of nowhere makes it to the Final Four.  So, as I made the 400 mile odyssey to beautiful Guilford, NH I had plenty of time to think about the race.  However, I did very little thinking about the race and instead listened to about 6 podcasts from Jay Mohr (Put Your Name On It!) and Adam Carolla.  The time went by quickly and before I knew it I had made it to NH and was very pleasantly suprised to find the Greystone Inn where I was staying at was right on the run course, only 1 mile from transition.  Their would be a big aid station right in front of the Inn during the race as well, this worked out great for my parents who had a great time spectating and gave me the chance to see them at 4 times up close and personal during the run.  Most races aren’t that spectator friendly, so that was a definite bonus.  After getting to NH I took care of registration and got settled into my room.

Saturday morning I headed out for a short bike ride on the course and followed that up with a 20 minute swim.  After that work was done I treated myself to a huge breakfast at a place called Kitchen Cravings (I would highly recommend this place for those in the area).  For those interested I had: 3 eggs scrambled, 2 pieces of toast, some home fries (the real kind), bacon (extra crispy), and two big pancakes.  Once the main meal was in me I headed back to my room and at on my but for mostly the rest of the day with the exception of taking my bike down to transition.

As for race day, I was up at 4am to get my breakfast in and get the day started.  I arrived at transition at around 6AM, got everything situated, and then enjoyed some “down-time” before my race started.  We in the 25-29 AG started in the 13th wave, starting at 7:55AM which was 55 minutes after the pros went off, so we had a pretty big crowd in the water for us to swim through.  I don’t remember the swim being to difficult in that regards, their was a little jostling through some sections where it was crowded but nothing big.  I tried to take the swim out at a good pace to get some distance at the beginning and then came into a sustainable stroke for the majority of the swim.  When I reached the last “out buoy” and was headed for home I started to pick it up and swim harder, essentially using each buoy as a target.  My goal was a :30 minute or less swim and the results have me at 30:13 so I will take that.  T1 went smoothly and I was soon on my bike, and could see my HR was soaring.  Their was a little run into T1 after the swim, so that coupled with the swim really had me working hard.  It would take the better part of 10 miles for the HR to settle, and in fact during the whole bike ride my HR more or less steadily decreased, even though the power increased….which is a good thing. The bike course was a rolling one with a few decent climbs, but also had some decent flat sections.  All in all it was a very fair course.  I could feel my legs a bit at miles 30-35 and wondered if I had been biking a little beyond myself, however that feeling went away quickly and never came back.  I biked just about exactly how I planned in terms of intensity, what the time is becomes the unknown factor due to the course, etc…I was really pleased to come into T2 with my best 70.3 bike split, which was 2:26.  I caught sight of Pat Wheeler, who started in my AG as I entered T2.  He was heading out on the run course, so I knew I had swam and biked pretty decent to be within a few minutes of Pat who is a triathlon stud with a 9:20’ish finish at Kona, and more recently 4th Age Grouper Overall at Couer d’Alene. (Pat ended up 2nd in the 25-29AG on the day with a 4:21 and more importantly finished 11th Overall, or if you go by Slowtwitch he cracked the Top 10 :), congrats to Pat on a great day on course in the midst of a huge training block as he prepares to battle on the Big Island of Kona once again this Octorber.  Good luck Pat!)

So heading out on the run I knew that if I ran like I could that I could get my sub 4:30 time, which was my big goal for this race.  My one fatal error for this race was that I went entirely to fast over the first mile.  When I started my watch the locator was not giving me a correct pace read out.  So I was essentially running by feel until it could get itself straightened out with the satellites.  Thus, I ended up running a sub 6 minute mile (in truth a lot below sub 6) or at least thats what the watch says.  The first mile as entirely by feel, and thats what I get for not being prepared.  Luckily, it didn’t hinder my run, the second mile was pretty much all on a slight incline so I backed off the gas peddle and made my way to the first turn around at around the 5k mark.  The course is a two loop course, which was great in my opinion since on the second loop you knew exactly where everything was and when you could turn on the after burners to bring it home.

Here are some pictures from the run: 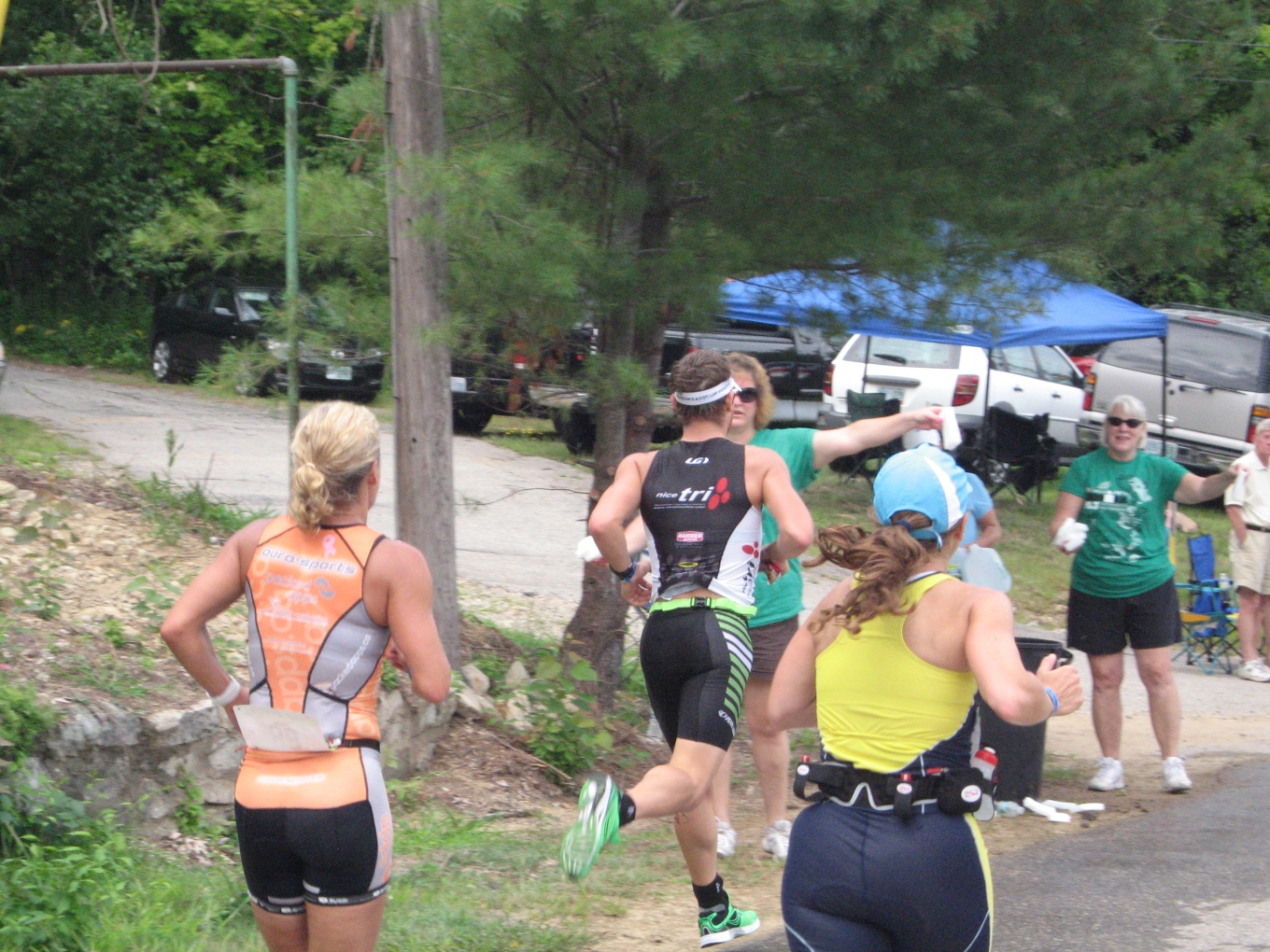 All in all the run went pretty smooth.  Over the last 2 miles I really tried to take it up a notch.  I wanted that sub 4:30 time and as you can see in this next picture I ran hard all the way to the line (as you should!)

Thanks to Dan at NiceTri for the gear to keep me looking good on the course, Base Nutrition for their great Amino Blend and Recovery Activator that keep me training and racing hard & most importantly to my Mom and Dad who came to NH and supported me during the race…and made sure that I had a nice bed to sleep in while at the race 🙂  Also want to give a shout out to my friend Chad Holderbaum who thre down a nice 4:22 on the day.  Once again Chad beat me by about 5 minutes, just as he did at the Musselman last month.  At least we both are getting faster..even if its at a similar rate 🙂  Chad is also in the midst of training for Kona in October, so train hard and best of luck on the Big Island.  Last but not least, thanks to Ian Mikelson for giving me a solid training plan leading up to the race.  Ian is a pro triathlete who will be racing with the big dawgs on Kona this October as well.  Keep an eye out for him.  You can follow him throughout his training and racing here –> Ian Mikelson’s Blog

Next up is IM Syracuse 70.3 and IMFL.  I will take this week relatively easy and then get back into it.  It’s going to be a really fun Fall with these races on the schedule.  Good luck to all those training for these and all the other race’s still on the 2011 schedule.  Hope to see you out their!

Congrats to the newest Mr and Mrs Swarthout. @lj458 #smittenwithswarthout thanks for a great weekend in the finger lakes.
Ok…so they really let me go huh? Wow….this was a horrible idea, but kind of awesome. Still not there. Ok. Phew Dans here. Oh my @krboucha got free. I think he’s going to make it. He’s here, race is on! And right in time for pave. Kevin got 4th and I got an hour of fun off the front. Thanks @rootedvermont and @michael.morse29 for not only winning the short course but letting me bunk down at the air bnb 🙌 #ride4claire amazing pictures by @matthew.stryker
Hi Everyone. Someone has been creating fake accounts with the #ride4claire logo and pretending to be me and messaging for donations. I Am not soliciting and will never be. Please do not respond or click anything. My only account is Turbeau86. Please report if they try to contact. Thanks!!!
It’s been a wild week, I won’t lie. But thankful for my family in hanging in there and making the best of it. Love you all! Tomorrow I #ride4claire with a slight launch point change. I’ll be taking off from Syracuse,NY and heading to Albany. 17,000 feet of climbing, 200 miles and a stop at the baseball hall of fame await! Let’s go!
Heading back home this weekend to get ready for the 2022 #ride4claire. First up on the trip is the Finger Lakes Gravel Classic on Sunday. Dragging my friends Mike and Gina along to see the Finger Lakes in all their glory! Then on Memoria Day weekend I set off on the two day trek from Penn Yan, NY to Boston. 400 miles in two days. The 2022 raise for the @bostonchildrens is now ovwr $10k. Link in bio to learn more!!
Happy Mothers Day to the glue of our family, @kaitcurbeau . You keep it all together for us. Claire and I love you to the moon 🌙 and back!
Join 2,272 other followers