Today we are going to take a trip in time machine all the way back to 1994 when people had money to spend, money accumulating in there 401k’s and when Turbeau Curbeau was entering 3rd grade.  It was during this year that Forest Gump was introduced to the public.  As a side note I would like to state that 1994 was a banner year for movies in my opinion.  Yes, Forest Gump led the box office making $329 million, however it was closely followed at $328 million by none other than The Lion King (which by the way was re-released just last month).  1994 also saw the release of Dumb and Dumber (a top 5 movie on my personal list), The Santa Claus with Tim Allen, The Flinstones with Rosie and John Gooodman (I vividly remember seeing that movie in the ghetto downtown Geneva theater that no longer exists which used to be next door to where the Geneva Bicycle Center is now located.  Also I remember getting a really cool glass mug from McDonalds who had the official toys and merchandise for the movie), Pulp Fiction, Maverick, and of couse ACE VENTURA!  Upon review of this 1994 top movies list, there really were a ton of great movies that year.  I think I saw Major League 2 on the list, Blank Check where that kid buys the castle/mansion place and races go karts around his back yard, Beverly Hills Cop 3, SHAWSHANK REDEMPTION!!!  Alright I will stop there, but I wanted to share this with you.

What brought me to begin this blog was that while running this afternoon it hit me that I have not heard anyone yell at me “Run Forest Run” in a really long time.  I can recall when I was in high school and college..yes I did occasionally jog at a pedestrian pace back then…that people would at least 2-3 times per week yell the “Run Forest Run” quote at me.  This got me thinking that the generation gap has just begun to get to big.  Grown adults usually are to ashamed to yell at a runner passing by and it appears that the younger generation has all together not been introduced to the great movie of Forest Gump.  Additionally I would have to say that my generation is to spaced out, brain dead for working, or to into Jersey Shore to remember any good piece of entertainment.  So this was something that just got me thinking, anyone else feel the same way?  Anyone have any recent encounters with the classic “Run Forest Run” comment?  I’d love to hear some stories.

In the mean time if you see me out and about feel free to yell at me! 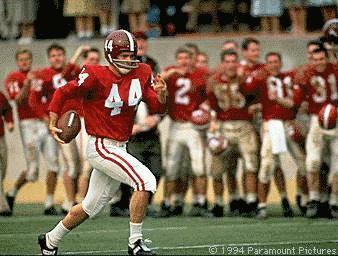