9th place is not sexy. It is not a wide-angle podium shot for the sponsors and it won’t appear in any of the articles that you see while flipping through your phones news feed. Likely, other than your buddies on the team slack channel, your parents are the only ones who are going to call and fawn over your aptitude for prolonged exercise outdoors. However, 9th place to me is but only 2 minutes from sneaking into the far-right hand side of that podium shot (or left depending on how you look at it). It’s coming within a whisker of something that superficially feels like MORE. It really doesn’t define anything as there is one winner and that man quite literally was born with a crown on his head…which was replaced with a pretty kick-ass cowboy hat courtesy of SBT GRVL….along with a giant check the size of his bicycle. Ricky-Bobby said it best, “If you’re not first, you’re last”…and yes that is very true, but its not the whole story.

Each one of us that did this race whether it was the the 38, 100 or 141 has an awesome story of how we got to the race, how we covered the distance and who we are going home to. I’d be remiss if I didn’t have that racer’s 5% regret about what if, because I think that’s what fuels the fire to keep training and focusing on the next thing…so that is my look back. The rest below is the other 95% percent that was positively right!

Leading up to the race some of my key training consisted of lapping different Finger Lakes as part of the FLX Challenge. Between a family weekend and friends wedding during the first two weeks of August, it lined up nicely for the finishing touches of preparation. Without even knowing it, THIS ride that I did which circled the entirety of both Canandaigua and Keuka Lake ended up being a fantastic prep ride as it was 140 miles and just over 9k of climbing…extremely similar to what I’d see at SBT GRVL. Completely unintentional and completely perfect.

Once out in Denver, my good friends (and athletes of mine) the Bockard’s gave me royal treatment by letting me crash at their place and hitch a ride out to Steamboat. With an easy ride and breakfast at Winona’s on Saturday everything dialed in.

Starting at 6:30AM the race began in the mid 40’s. It was chilly and getting the apparel choices just right was a special task in of itself. I opted to wear a base layer with the Velocio Radiator jersey, Velocio arm warmers and a lightweight jacket that went over top my camelbak that I chose to wear. I opted for the camelbak as it would allow me to carry an extra 50oz of fluid in addition to my 2 bottles which would let me roll through the first 2 aid stations without stopping and thus avoiding the mass chaos that was occurring at those stops since so many people were still at the front of the race. This strategy worked just about perfectly with the exception that one of my water bottles was launched about 10 miles into the race when we hit gravel. This has literally only happened to me one time in my life and although it didn’t matter that much in terms of a hydration issue, it would come to bite me in the ass a little bit later in the day.

At the front of the race nothing really materialized over the first almost 100 miles. There were some steeper sections along with windy flats and rocky pave sectors, but after each acceleration over those most of the contenders would regroup. Attrition would prove to be the main factor as the simple fact of covering 100 miles brought the group to maybe 20 riders as we headed into an aid station that was a little under half-way up the longest climb of the day (see profile with notes above). This aid station proved to be the determining factor of the race. Had I known exactly where this aid station was and what immediately followed it, yeah, I would have done things a different. However, that’s in the past. As I said earlier I had launched a bottle and although it didn’t impact my hydration it did call for a stop at this mid climb aid station as I had no more fluid left in my camelbak nor in my bottle. Thus, I needed to get my bottle filled for the remaining 40 miles. Had this been with 20 miles to go I would have risked it and just went. But I didn’t and because of that Ted and about 8 others ripped through the aid station lightning fast, smashed the quick downhill and proceeded to motor up the remaining 8.5 miles of climbing. Due to the extra maybe 30 seconds it took me to load my bottle up I ended up in a chase group consisting of about 5 people.

Here is where I made the biggest choice of the day for better or worse. Instead of chasing up to a rogue rider that went solo from us, I chose to stick with 3 other riders including Matt Lieto and Jeremiah Bishop as we went up the climb at a bit more of a tempo pace instead of an eye-popping assault. Retrospectively I think to myself, did the more sustained tempo we rode allow me to stay strong through the finish and place where I did, OR did it prevent me from potentially getting 5th place? The rider who went solo from us managed to make contact with 4 others who been dropped by Ted, Payson, Jacob and Colin. Do I think I would have been with Ted? Nah, most likely not. But I do regret not letting it rip more on the climb as I really believe I had enough in the tank to make it that pack of 4 that was created. Alas, that’s not the choice I made. In taking the climb at a more sustained pace it did allow me to recover somewhat and leave me with reserves over the final ~30 miles once we reached the top.

After reaching the summit of the highest point on course we began descending all the way to the finish. The caveat here is that although the general theme was DOWN we still had 3-4 MAJOR climbs. These relatively “short” climbs made up for their lack of distance in the steepness they packed. It is here where I think my decision to maintain a steady pace up the long climb paid off in droves. As we hit each of these shorter climbs I was able to pick up the intensity each time. Taking the group, I was with down to just one other rider, (Matt Lieto) who was able to go with me up one of the steep pitches. Once we had separation we made sure to hit one final aid station before taking on the final two climbs of the day. Matt and I had a little bro time where we chatted briefly and then got back to work when we hit the SmartWool Corkscrew climb, the third and final timed KOM. On this climb Matt gave me his blessing to go and chase the group of 4 riders that we caught sight of. It was just under 20 miles to go at this point. I ended up climbing that KOM with the 5th fastest time of the day and I closed maybe a minute on that group over those final miles. However, I simply ran out of terrain and finished in 9th place. At the end of the day I was 2 minutes in arrears from 5th place and about 13 minutes from Ted who finally went clear of his two companions and won by a little over a minute with a finishing time of 6:34:50.

Am I happy? Heck yeah, I executed a 141 mile race at the highest elevation I have ever ridden a bike at. This being a race too, I am pleased that I was able to handle the elevation without it materially impacting my performance. With all that my family and I have going on right now I am damn proud of being able to achieve a top 10 result in such a contested race. SBT GRVL, although a first-year race drew almost every top rider in the gravel racing category. This was even with the unsanctioned Gravel Worlds race held the day before and its defending champion Colin Strickland opting for SBT GRVL instead. It just goes to show you when you put some real $$$ up for grabs, the hitters come to ride!

At the end of the day as I wasn’t on the top step I will always have that small % of regret. That is simply the racers mentality and one that you probably have to have as it makes you get right back on the bike and train hard for the next opportunity. Yet, just about everything else about this race was the success I had been looking for over the past year. I take great pride in being able to compete with the best riders in the country, some of who make their living riding and racing bikes. This new dad of 7-month-old Claire, with a full-time job is damn proud and hungry for more chances like this. You can bet that I will be back at SBT GRVL next year!

My Gear for SBT GRVL:

Special THANK YOU to my friends Cliff and Susie Bockard for taking me in for a wonderful Colorado trip in Denver and Steamboat. The generosity from you and your parents made this trip super easy and let me really focus on having the best race possible. I can’t thank you guys enough. They also happen to be racers who let me coach them and they both had great races with Susie ripping around the BLUE 100-mile course and Cliff taking on the BLACK 141-mile course with me. Can’t wait to be back with you guys next year! 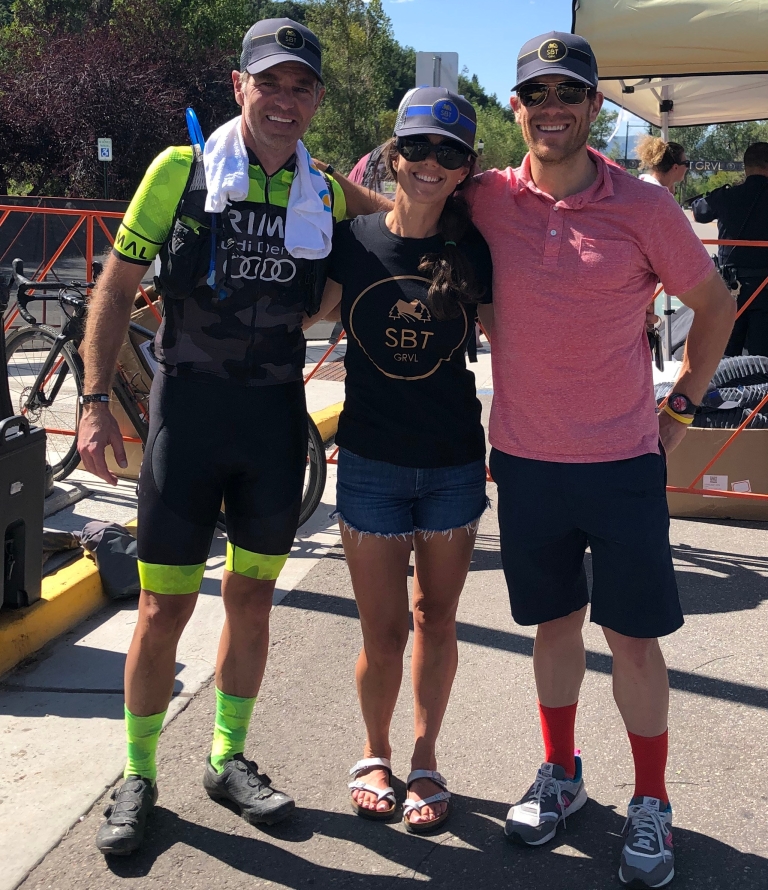 Last but CERTAINLY not least, thank you to my amazing wife Kaitlin who was home with our beautiful Claire, for allowing me to take something like this on. It might not make sense to a ton of people, but it means the world to me that you guys can understand why I like to ride my bike over long distances against other people who have the same mental condition. Racing my bike isn’t who I am and not my total identity, but it is a piece of me and I am privileged to have the chance to keep striving for that MORE that is out there.

See you next year SBT GRVL.

@herbertkrabel @larsfinanger found this crispy @slowtwitch sticker on a P2-SL today. Cheers!
Rocking our matching @holtoffcancer shirts today with my girl! #ride4claire
#ride4claire 2.0 is officially a GO! June 25-26th I’ll be flipping the direction and discovering what riding the 400+ miles from Keuka Lake, NY to Boston, MA feels like. Looking forward to supporting @bostonchildrens and sharing the journey. Here’s to seeing familiar faces on the road as the training ramps up and the world opens up a bit. Follow link in profile for more info and stay tuned for some fun things popping up over the next month.
You make it all possible @kaitcurbeau Happy Mothers Day. Claire’s got a great one!
Find someone you love as much as #ride4claire loves her Paw Patrol pals. Thanks grandpa. #pawpatrol
Business. Mixed with pleasure. @hyperice + @saris.proscloset = can’t be beat.